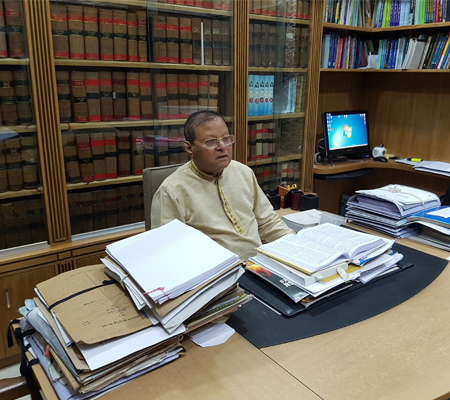 Barrister Shafique Ahmed was born on July 16, 1937 at village Narayanpur of Brahmanpara Upazila in Comilla. He is the youngest among four sons and five daughters of Late Taleb Ali and Begum E. Nessa.

Barrister Shafique Ahmed passed Matriculation in 1953 from Comilla Govt. Zilla School in first division, Intermediate in 1955 from Dhaka College in first division. He obtained his honors and Master’s degree in Geography from Dhaka University in 1958 and 1959 respectively. He secured first position in second class in both BA (Hon’s) and MA examinations. He passed LLB from Dhaka University in 1963 and LLM from King’s College, London in 1967. He received his Barrister-at-Law degree from Lincoln’s Inn, London in 1967.

Barrister Shafique Ahmed was skilled sportsman during his student life.

He travelled widely and participated in many international seminars and conferences in different countries.